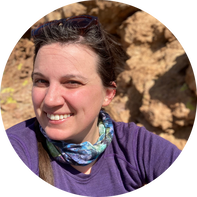 ​​Tess grew up on a small farm in southeast Michigan where she developed a deep love for the outdoors. She received her Bachelor's degree in Earth System Science from McGill University before moving to southern Arizona in 2014 to escape the cold. She quickly fell in love with the exposed geology, diverse ecology, rich culture, and starry nights of the sky island region.

She has spent her time in southern Arizona interning and working for various federal and local land management agencies, where she's managed a variety of natural science and ecological restoration projects. Her passion for combining ecological and watershed restoration with the healing of communities and human-landscape relationships led her to pursue a Master's degree in Landscape Architecture at the University of Arizona, which she completed in 2020.

For 9 months in 2016-2017, Tess was on a federal inter-agency botany crew based at BRN. She had a fabulous time collecting seed, experimenting with seed cleaning and pelletizing techniques, and getting to know the Native Plant Program staff. She is very excited to return to BRN!

Tess spends her free time hiking and botanizing in the sky islands, reading about outer space, and making strange music in her bedroom recording studio. Her musical explorations have lately revolved around modular synthesizers and heavy manipulation of nature recordings, but she dabbles in a variety of acoustic instruments as well. She also enjoys botanical illustration and interpretive design and has recently begun exploring videography as an interpretive medium.